Key Metrics In Model Monitoring And How To Measure Them

In this blog you will get familiar with the monitoring metrics for machine learning models. 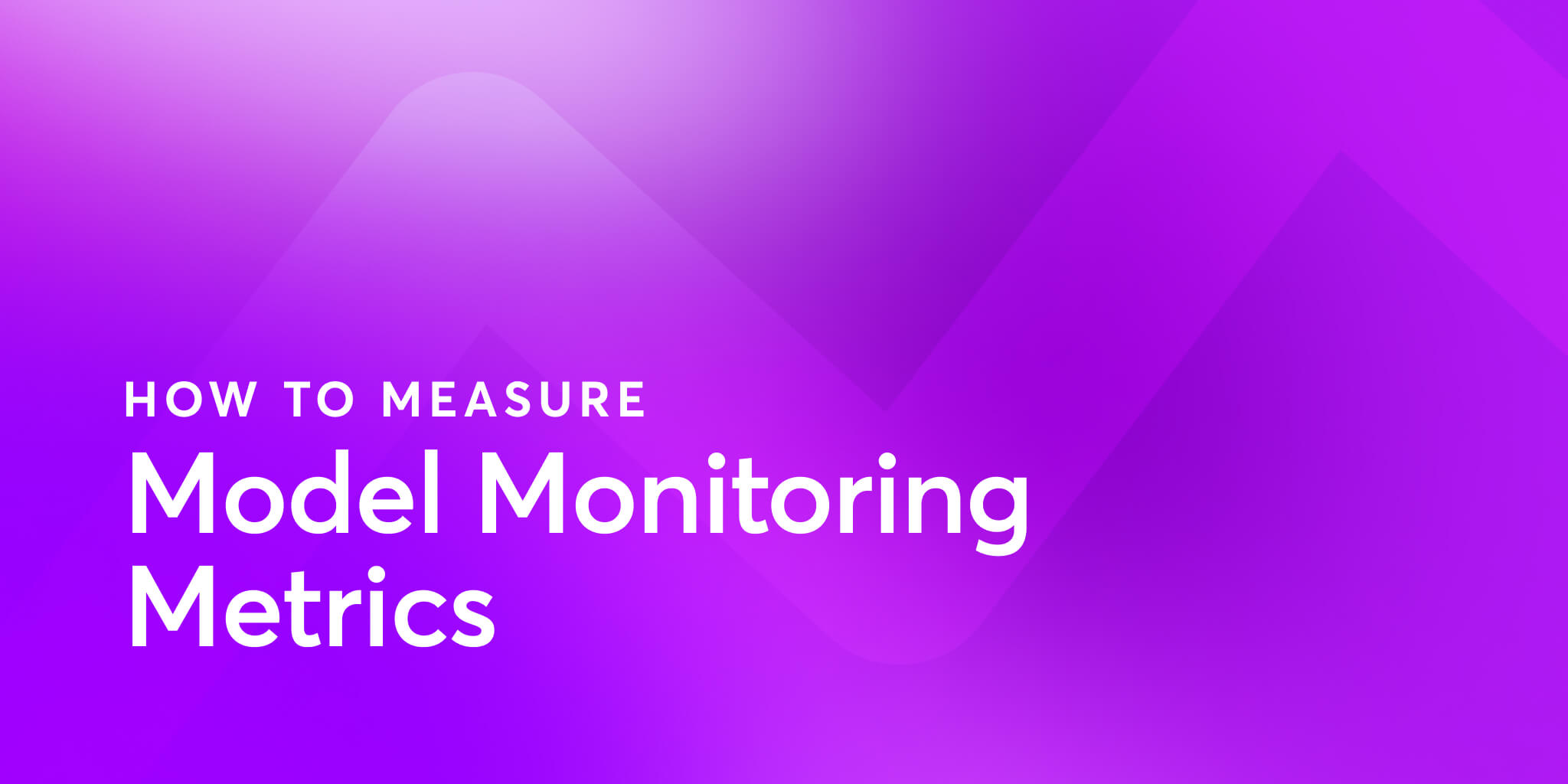 Machine learning tasks are linked to monitoring and evaluation measures. Different metrics exist for classification, regression, statistical, ranking, and monitoring tasks. You should be able to increase your model's overall predictive capacity using several metrics for improving its performance before/after deploying it on unknown data. So, let’s first understand what model metrics are.

Model metrics are utilized to track and measure a model's performance (during training and testing). They aren't required to be differentiable. Evaluation and monitoring metrics are the most common kind of metrics.

But how do these two metrics differ?

Once the model is in use, you must immediately consider keeping it running correctly because it is now providing business value. Any interruption in model performance results in a direct business loss. The actual issue in any machine learning model is its maintainability, i.e., it should act the same with training and live data. The model monitoring metrics kick in at this point. It aids in the avoidance of data skews and stale models. Some monitoring measures are checks for data quality, data drift, target drift, segment performance, bias, and outliers.

It's also worth noting that model metrics aren’t the same as loss functions. Loss functions display a measure of model performance and are used to train a machine learning model. They are usually differentiable in model parameters. On the other hand, metrics are used to track and measure a model's performance (during training and testing) and do not need to be differentiable.

Model performance is a concern for machine learning practitioners. They concentrate on how to construct a generalized model. Machine learning models cannot be 100% efficient. Thus accurate and approximate findings on unknown data are required; otherwise, the model is useless. To construct and deploy a generalized model, you must evaluate it using a relevant metric or a custom metric created using a combination of different metrics. This will allow you to improve the model's performance, fine-tune it, and acquire a better outcome.

Furthermore, because different evaluation measures fit on different sets of a dataset, it is critical to grasp the advantages and disadvantages of assessment metrics.

It's the average of the absolute discrepancies between the actual and anticipated values from the model. A low MAE indicates that the model is good at prediction, but a large MAE indicates that your model may struggle in some areas. An MAE of 0 suggests that your model accurately predicts the outputs. The L1 loss function is another name for MAE. The MAE is calculated as

Finding the squared difference between the actual and anticipated value is defined as a mean squared error. It is a widely used and straightforward statistic that accounts for a slight change in mean absolute error. The outliers are penalized the most if the dataset contains outliers and the estimated MSE is larger. The MSE is calculated as

It's the root-squared difference between the actual and anticipated values on average. It is calculated by taking the square root of MSE. It is good to have the RMSE value be as low as feasible because the lower the RMSE value, the more accurate the model's predictions are. A higher RMSE indicates that the expected and actual values differ significantly.

Since RMSE is not scale-invariant, the data scale influences comparisons of models using this metric. As a result, RMSE is frequently applied to standardized data. When compared to MAE, it is less resistant to outliers. RMSE is calculated as

It's the RMSE of the log-transformed predicted and target values, i.e., transforming the predicted and real dependent variable in RSME into a logarithmic value.   It's also helpful when looking for percentage errors rather than absolute values.

If you understand the above three evaluation metrics, you won't have any trouble comprehending RMSLE or most other evaluation metrics used in the regression-based machine learning model. When creating a model without calling the inputs, the RMSLE metric comes in handy.

In that instance, the outcome will be quite variable. Because actual and projected values can be 0, and the log of 0 is undefined, 1 is added as a constant when calculating RMSLE. The penalty for underestimating the actual variable in RMSLE is more significant than for overestimating it.

It is the percentage of variance explained by a relationship between two variables. It calculates the fraction of the dependent variable's variance explained by the independent variable. An R2 score is a number that runs from 0 to 1. The regression model is better if the R2 is close to 1. When R2 is equal to 0, the model does not outperform a random model. The regression model is incorrect if R2 is negative. So, using R squared, we can compare a model to a baseline model that none of the other metrics can provide. This metric is calculated using this formula:

SSE = sum of the square of the difference between the actual value and the predicted value.

It is a variant of R-squared that considers the number of predictors in the model. The adjusted R-squared rises when the new term improves the model more than anticipated by chance. When a predictor enhances the model by less than predicted, it declines. The modified R2 indicates the percentage of variance in the dependent variable that the independent variables can explain.

The absolute magnitude of the largest significant difference between a predicted variable and its real value is the maximum error, or ME. While the most popular measure is the root mean square error (RMSE), it might be challenging to comprehend. The Max-Error metric measures the worst-case error between the anticipated and true values. If the Maximum Error is substantially more significant than the RMSE,  the model likely failed to predict outliers correctly.

The most basic metric is classification accuracy. The accuracy of a classifier is the percentage of times it predicts accurately. The number of correct predictions divided by the total number of forecasts is accuracy.

Note: Accuracy is essential when the target class is well balanced, but it is unsuitable for imbalanced classes.

The confusion matrix (also known as the error matrix) is a tabular depiction of model predictions versus ground-truth labels. It is one of the essential ideas in classification performance.  The examples in a predicted class are represented by each row of the confusion matrix, whereas each column defines the occurrences in an actual class. It is one of the most intuitive and straightforward metrics for determining the model's correctness and accuracy. The matrix looks like this:

Note: Aim to reduce either False Positives or False Negatives for your model.

Precision explains how many of the correctly anticipated cases turned out to be positive. Precision comes in handy when false positives are more of a problem than false negatives. As a result, precision estimates the accuracy of the minority class. The ratio of accurately predicted positive instances divided by the number of predicted positive examples is used to compute it. Here is the formula for the same:

Another significant parameter is recall, defined as the percentage of samples from a class that the model correctly predicts. So, if we want to focus on limiting false negatives, we'd like our recall to be nearly 100 percent without sacrificing precision. If we focus on minimizing false positives, we'd want precision to be as close to 100 percent as possible. This is how recall is calculated:

It presents a synthesis of precision and recall metrics. When precision becomes equal to recall, it reaches its peak. The harmonic mean of precision and recall is the F1 score. An excellent F1 score indicates that you have a low number of false positives and false negatives, indicating that you correctly identify severe threats and are not bothered by false alarms. When the F1 score is 1, the model is deemed perfect, but when it is 0, the model is considered a complete failure. This is how the F1 score is calculated:

The fraction of real negatives anticipated as negatives is known as specificity (or true negative). This means that a part of true negatives will be forecasted as positives, referred to as false positives.

The proportion of people who are healthy and are genuinely projected as healthy, for example, is an excellent example of specificity.

Although machine learning can be thought of as applied statistics, and thus all ML metrics can be considered statistical metrics, statisticians often employ a few measures to evaluate the performance of statistical models. The following is one of the most commonly used measures in this area:

It offers us a sense of the degree to which the two variables are related. It's a bi-variate analysis metric for describing the relationship between two or more variables. In most businesses, expressing one issue in terms of relationships with others is helpful. It serves as the basis for a variety of modeling methodologies. Correlation analysis that is done correctly leads to a better comprehension of data.

There are two sorts of correlations: positive and negative.

Additionally, no correlation means that if the value of one variable rises or falls, the value of the other variable(s) does not rise or fall.

Regardless of the modeling choices, recommender systems finally produce a ranking list of objects. As a result, instead of relying on other proxy measurements, it's critical to consider how to evaluate directly ranking quality. The effectiveness of a recommender is assessed using a variety of evaluation indicators.

It is also referred to as the average reciprocal hit ratio (ARHR). This is the most straightforward metric. It attempts to answer the question, "Where is the first significant item?" One could argue that hit ratio is a binary variant of MRR because it becomes 1 if there is a relevant item in the list and 0 otherwise. For a set of queries Q, MRR is essentially the average of the reciprocal ranks of the first relevant item.

In this blog, you learned about some of the popular metrics that play a crucial role in the machine learning model lifecycle as a part of the monitoring stage. To ensure the consistent performance of your model, you need to track some metrics mentioned above. You can select the metrics based on your model and the use case. But this tracking is crucial as your models require rigorous performance assessments because of their significant contribution to your business. These metrics help you ensure that your model is in the proper condition and working as expected.

How To Monitor ML Models In Production

In this post, we'll look at keeping track of machine learning models once they've been deployed and are running in production

Model Monitoring - What, Why, and How?

As models are being built and scaled, organizations are facing the problem of maintaining the models. This blogs lists the challenges and solutions of monitoring models in production.